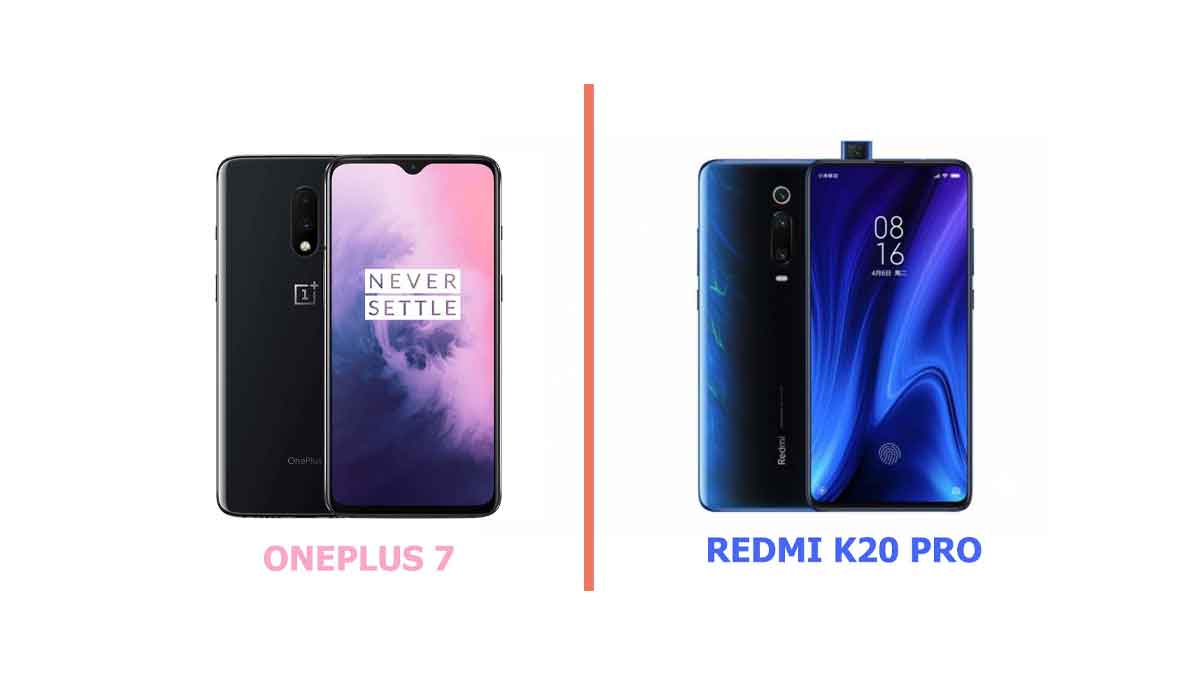 Redmi has just launched Redmi K20 Pro (Review) in the Indian market with a price of Rs 27,999 for 6 GB of Ram and 128 GB internal storage. It has Snapdragon 855 chipset inside and of course, it’s competing with OnePlus 7. The price difference is around Rs 5,000 between those two devices but still, people are confused which smartphone they go with, and that’s why I here with an in-depth comparison OnePlus 7 vs Redmi K20 Pro. So you can decide which smartphone is best for you…

Both the smartphone comes with glass unibody but both the devices have a different kind of design on the rear side. OnePlus 7 has regular gradient back finish but protected with latest gorilla glass 6 which means it will give you one extra layer. While Redmi K20 Pro comes with an all-new gradient back finish and it will give new and fresh look but this one is protected with last year gorilla glass 5 protection.

Now coming to display quality, the Redmi K20 Pro has a pop-up selfie camera setup and because of that Redmi manage to get 91.99% screen to body ratio and that’s it calls Full view display. On the other side, One plus 7 comes with due drop notch, which menas it doesn’t have full view display panel.

It’s a clear win for Redmi K20 Pro. Both the smartphone comes with the in-display fingerprint sensor. Overall display quality is the same on both the smartphone, it just that one has FullView display & one has waterdrop notch.

Performance is quite similar on both the smartphone, but in my testing OxygenOS has little bit advantage when it’s come to Ram management. And if aks any user “Which is your best UI in android” then a majority of people will say OxygenOS. It also depends on a user who is planning to buy a new device, so yes if you like OxygenOS then any day OnePlus 7 is for you or if not, then Redmi K20 Pro is the smartphone you are looking for.

The overall both handset has the same chipset inside which menas performance will be very close, now it depends on you which UI or Software yo like most.

Now it depends on which Software you like the most and what’s your budget.

While OnePlus 7 comes with a 48-megapixel primary sensor with 1.7 aperture and 5-megapixel depth sensor with F/2.4 aperture. One the front, it has 16-megapixel selfie camera setup with F/2.0 aperture.

Redmi K20 Pro has a triple rear camera setup while OnePlus 7 has a dual camera but still, I feel like there is no difference in camera quality on both the smartphone. Both are quite similar in camera performance.

Overall in the camera department, it’s a tie.

So it’s a clear cut win for Redmi K20 Pro. As you all know MIUI 10 is power sufficient software which means it will give better battery like the OnePlus 7.

If you ask me which smartphone you will buy then any day, I will buy Redmi K20 Pro. It has everything that you will need in a flagship device and the good thing is, it available at affordable price. So it’s a win for Redmi K20 Pro.

If I some up all the thing here, Redmi K20 Pro has an in-display fingerprint sensor, motorized pop-up selfie camera setup, full view display, Snapdragon 855 chipset, 27W charging support, glass unibody, and MIUI which is power sufficient UI. While OnePlus 7 has an old design, priced Rs 5,000 higher then K20 Pro.

Now you decide which one is best.

It’s Full comparison & Review OnePlus 7 vs Redmi K20 Pro, I hope you have the answer now but still if you have any question then let me know in the comment section below.

In this article:OnePlus 7 vs Redmi K20 Pro