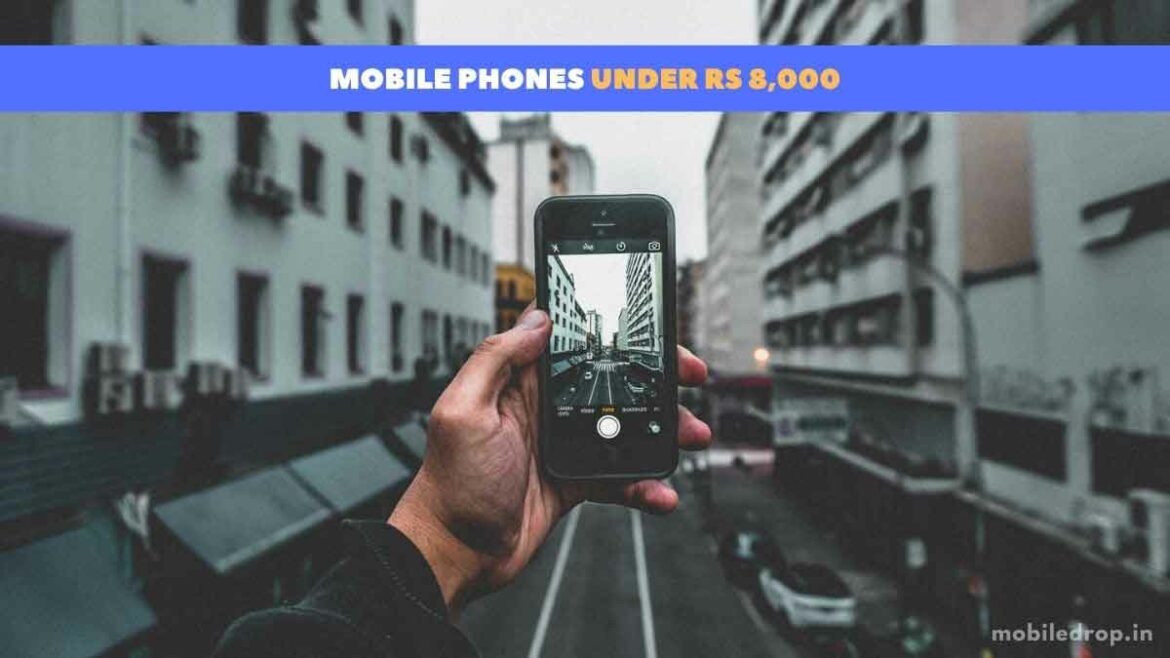 In short, start with a budget smartphone and then move to premium. Still, if you want to buy a 10k or 20k or 30k smartphone then just go for it but if you want the best affordable smartphone under Rs 8,000 then you’re in the right place, so let’s see some of the best ones for you…

POCO has a smartphone for all price range, whether your budget is 15k, 20k or even 10k. The POCO C3 is the best smartphone they have ever produced at an affordable price range. The phone is powered by MediaTek Helio G35 SoC and it’s running on MIUI 12-based on Android but the phones don’t have ads in the UI like Redmi Phones.

It also has a decent camera setup, so don’t expect too much from the camera department and also at Rs 6,999, this is the best you got. The POCO C3 has a massive 5,000 mAh battery with 10W charging support and it has a USB port for charging.

Overall, if you want a stable smartphone with no lags then POCO C3 is the best smartphone you can buy for under Rs 8,000 in India. It has all the elements that users are looking for in an affordable mobile phone.

I was so excited about Micromax comeback but they blew up. The Micromax IN 1B (review) has the best specification in the 6k price range, the phone has a type-C port, 5,000 mAh battery, stock UI with an Ads great processor but when it comes to user experience, the didn’t have the time to optimize the UI.

The phone does have Stock UI but it feels un-polish, Micromax needs to work on software, and once they do that this phone will be the best smartphone at a 7k price tag.

Just because of the un-polished UI, the cameras are also not that great, the phone does have a good sensor but it’s not optimized and that’s the reason, the images are not as good as the sensors.

Overall, if you want a Type-C port, good performance, huge battery, and an Indian branded phone then Micromax IN 1b is worth looking at.

BUY Micromax IN 1B

RealMe C11 is powered by MediaTek Helio G35 SoC and it’s running on RealMe UI 2.0 based on Android 10. The phone does have ads in the UI but you disable them from the setting which is good but still, there will be ads here and there.

The phone comes with a 13MP + 2MP rear camera setup while there is a 5MP front camera setup and both the cameras can shoot videos in [email protected] Now, this is a 7k smartphone which means, don’t expect the camera to be superb but what you’re getting at 7k is worth it.

The RealMe C11 is only available in 2GB Ram + 32GB storage which is not acceptable. There are tons of other phone that offers 3GB or even 4GB Ram at Rs 7,999 and here, we have the RealMe C11 which only has a 2GB Ram option.

Xiaomi rules the budget segment in India, they have a smartphone for all the prices but this year, at the affordable price range, they haven’t launched a good smartphone. The Redmi 9A is powered by MediaTek Helio G25 Processor which is not worth looking at Rs 6,999.

You choose which one to get at what price. Redmi also has Redmi 9i but this one is priced at Rs 8,299 and this too has the same specs as Redmi 9A but it comes with 4GB Ram + 64GB storage, everything else is the same as Redmi 9A.

It’s a bit confusing which smartphone to get under Redmi 9 series as there are many options available. In short, if you want more Ram & Storage then the Redmi 9i is the phone for you but if can live with 3GB Ram and 32GB storage then Redmi 9A is the best option.

Overall, the Redmi 9i or even Redmi 9A is not worth buying because the phone has MediaTek Helio G35 Processor which is not acceptable at a 7k price tag, there are tons of phones available with MediaTek Helio G35 at the same price with more Ram and Storage.

All of the above smartphone, POCO C3, and Micromax IN 1b is the best phone you can buy. Both of them have good specs, so you can choose whichever you like the most.

Now, if I have to choose one smartphone then I would go with POCO C3 because Micromax IN 1b has some software issue that can be fixed by an OTA update but I don’t buy smartphones on future promises. I pick is POCO C3

Is it Worth buying Amazfit GTS 2 Smartwatch?

Best Mobiles at Every Price Range in India...